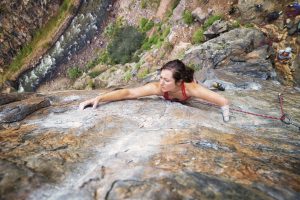 elbow, they floated the idea of amputating her toes and “install[ing] them as fingers” in place of her hand.

But even for a professional rock climber, 10 fingers didn’t turn out to be necessary. Today the 2005 Ellsworth High School graduate and star of the 2017 film “Stumped” has 10 toes and five fingers and spends her days scaling rock faces. And the prosthetic arm she used to wear? “Totally gone! Lost somewhere in my house.”

“Stumped” is among 37 short films on tour as part of the 2017/18 Banff Mountain Film Festival being screened Friday-Sunday, Feb. 2-4, at The Grand in Ellsworth. “Stumped,” featuring Beck, will be the last film to show on Saturday, Feb. 3. The Ellsworth-born climber will be on hand to answer questions after the screening.

Beck grew up in Ellsworth with her parents, Chris and Deborah Whalley, and three younger brothers, none of whom took to the sport quite like she did. Her introduction to clambering up crags came early, at Girl Scout camp in Millinocket when she was 12.

“A counselor would scramble up a rock and run a rope through a bolt at the top. It’s probably not the safest thing, now that I think of it,” she recalls. “But I remember thinking it was just so cool. You have laser focus.”